Enhancing oil recovery in an unconsolidated sand formation is one of the most critical challenges in any sand face completion. Failure to correctly address the issue of sand production can heavily impact the productivity and life of a well. Potential erosion risks also can impact the integrity of equipment and safety. Dealing with unwanted produced sand costs the global oil and gas industry billions of dollars annually and can pose an environmental threat.

In poorly consolidated formations, water breakthrough and high drawdown pressures encourage sand production since the formation water can dissolve minerals cementing the sand grains together. Drawdown pressure imposes stress on the formation surrounding the wellbore, and the drag from the produced fluid detaches sand grains, carrying unwanted grains into the well. This situation can compromise the structure of the reservoir and can severely restrict attempts to enhance oil recovery if adequate sand control methods are not deployed.

Long, horizontal and multilateral wells are now increasingly more common due to the advancement of drilling technology over the last few decades. These wells create greater reservoir contact, improving productivity and hydrocarbon recovery. However, attempts to exploit the benefits of these wells can be impeded by unwanted fluid breakthrough and sand production. Where this occurs, the combination of sand control technology enhanced with the latest developments in inflow control technology is proving to be an effective system in controlling sand production and enabling IOR.

Early water or gas breakthrough in parts of the wellbore can be caused by a range of issues, including reservoir heterogeneity, varying permeability, saturation or frictional pressure losses. This might negatively impact oil flow from the rest of the well.

Using inflow control devices (ICDs) or autonomous inflow control devices (AICDs) in conjunction with sand screens can maximize recovery by maintaining the sand control integrity and effective drainage. This technology also is relatively straightforward to install. Compartmentalization with swell packers between zones and uneven sections can reduce annular flow and, as a consequence, reduce the risk of fluid flow converging on one section of the completion, creating a “hot spot” for screen erosion.

ICDs, which create additional pressure drop to restrict flow, have been in use for several years. Their relatively simple design has led to installations on various types of wells with great success. They also have been used successfully as an inner screen completion within a failed screen gravel pack, stabilizing water production to a manageable rate and completely stopping sand production. However, they are passive in nature and cannot be adjusted after installation. In the event of water or gas breakthrough in one part of an oil well, the disadvantages of the passive ICD become clear since oil production can be overwhelmed by the production of the unwanted fluid.

A recent technological breakthrough in this area has been the development of AICDs. These are self-regulating flow control devices that have the ability to change the amount of flow restriction based on the properties of the fluid flowing through them. Unlike passive ICDs, which produce greater flow restriction for fluids with higher viscosity, AICDs can restrict water and gas more readily than oil and can enhance phase filtering, where the phases have a higher mobility than the desired fluids. This ability allows more even oil flow from all segments of the wellbore and prevents the excessive production of unwanted fluids from segments that have experienced a breakthrough of water or gas. Ultimately, this capability can play a major role in EOR by creating a lower water cut and lower gas-oil ratio.

AICDs help manage the distribution of flow from the reservoir along the length of the wellbore and prevent the drawdown and high flow-rate conditions that can destabilize the formation matrix. When combined with specialized sand control technologies, including premium and wire wrap screens with a range of high-quality mesh options, AICDs reduce the chance of developing hot spots on the screen and provide a solution to prevent sand production in wells producing from poorly consolidated formations.

Following the introduction of horizontal wells in the early 1990s, ICDs became recognized as a solution for the management of effective flow distribution aimed at preventing the premature breakthrough of unwanted fluids. They have been deployed successfully at locations throughout the world. The lack of flexibility afforded by ICDs led to the evolution of the AICD, transforming a once passive technology into a fully autonomous device. AICDs are able to constantly adapt to changing parameters along the entire length of the production interval and allow for greater control of reservoir production.

One type of AICD, a levitating disc-based valve from Tendeka, has been deployed successfully in more than 75 wells globally with more than 15,000 valves in light and heavy oil reservoirs to overcome water or gas breakthrough and ensure uniform production. The valve operates by adapting to changes in fluid viscosity, preferentially restricting the flow of low-viscosity unwanted water and gas while promoting the production of oil from the entire length of the well. The greater restriction of low-viscosity fluid is created by the movement of the disk to create a smaller flow area through the AICD and, hence, a greater flow restriction.

The Tendeka AICD controls both gas and water, while its design also permits washdown and spotting of breaker fluids during deployment of the lower completion. The AICD is configurable for a range of production conditions and can be combined with a sand screen in an unconsolidated reservoir as the reservoir fluid passes from the formation through the screen and into the flow chamber. It can be incorporated easily into a screen joint without base pipe inner diameter protrusion.

Used in conjunction with the company’s portfolio of specialized sand control technologies, AICDs allow operators to design and create the ultimate sand and inflow control solution.

One example where Tendeka’s AICDs have been successfully deployed is on the Troll Field offshore Norway. The AICD is incorporated with premium screens to provide sand control and inflow control for a thin-layer oil rim of 11 m to 26 m (36 ft to 85 ft). In the early years passive ICDs were employed in the field. Once gas breakthrough occurred, the high mobility of the gas rapidly dominated the flow in the well. A 20% increase in cumulative oil production was recorded in the AICD completion trial well within the first 18 months of production in comparison to a passive ICD equivalent.

A key question in the drive for enhanced oil production is how best to control and manage the production of sand, and the introduction of a number of new technologies in this field have significantly improved performance with associated cost savings.

There are various methods for controlling and managing sand. The introduction of AICDs within a comprehensive sand control solution adds a further dimension to EOR efforts.

Traditionally used as an inflow management technology, it is clear that these devices also can be deployed effectively to assist in the control of sand production and therefore EOR. They are a proven addition to the reservoir optimization mainstream and offer new options for cost-effective completion designs and sand control. 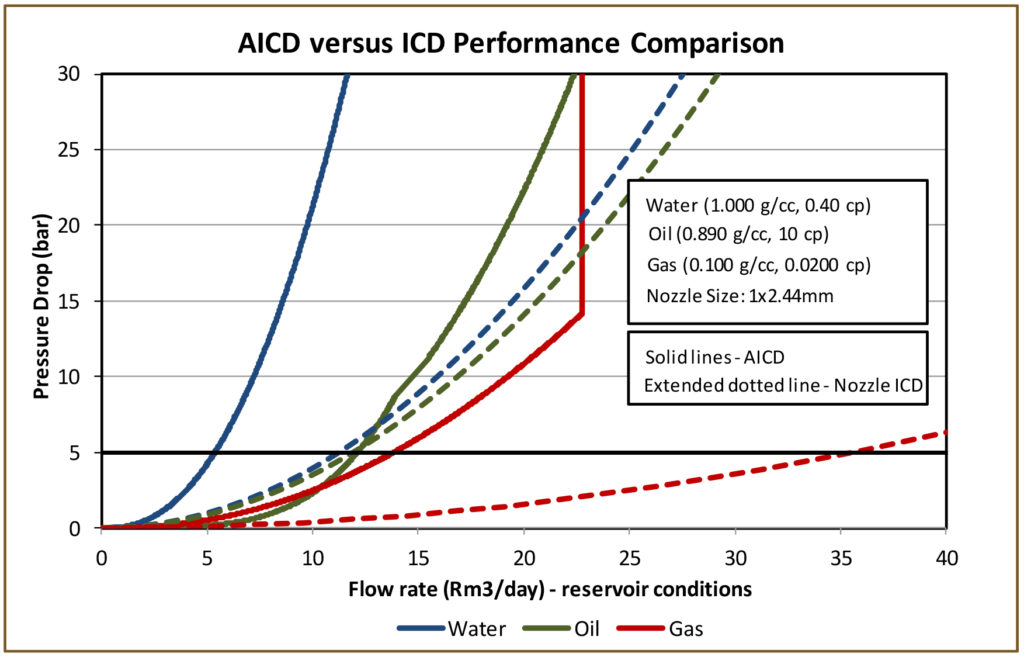