Having grown up outside Aberdeen, a career in oil and gas was not on Eilidh McKay’s radar when assessing her options when leaving school – so much so that she opted to study sports and exercise science at Robert Gordon University.

After graduating, science-focused roles in oil and gas started to appeal but it was only after starting as a laboratory technician at Westhill-based Tendeka that she realised how many engineering opportunities there were in the industry.

Over the last six years, Eilidh has broadened her skills and is now Technical Support Manager at the independent global completions service company, having recently been promoted from Applications Engineer.

“Engineering was not something which was encouraged when I was looking at career choices prior to joining Tendeka,” Eilidh said.

“When I was applying for jobs, I was looking for a more science-based role and the concept of formulating new rubber compounds was appealing to me. However, since joining the company and working with extremely talented engineers, it changed my focus to look at the bigger picture and not necessarily focus on one area.”

Eilidh says the standout moment in her career so far was helping secure Tendeka’s largest ever swells contract which was helped by a change of mindset.

“I helped develop a rubber compound which secured the biggest swells contract for the company and has since been successfully used over 4,800 times in multiple Tendeka products. It’s something I’m really proud of.

“From a personal angle, I’m also proud to be in my current role within six years of joining the company, managing my own team as Technical Support Manager. That’s something I would never have anticipated.

“A change of approach really helped. Prior to starting at Tendeka, I believed the negative perception regarding women in the oil and gas and assumed this would be something I would experience.  Due to this, I lacked confidence in my ability, as I was female, I was young, fresh out of university and had no experience or education in oil and gas.

“However, after joining the company and being mentored by my colleagues, I realised that is not the case.  My opinion, right or wrong, has always been listened too and discussed. I have been encouraged to believe in myself and my ideas.  I have found if you have a passion for something, someone is always willing to listen.”

Following the downturn over the last few years, Eilidh believes the oil and gas industry needs to step up to replace the experience and knowledge that was lost as well as companies working together more to help attract young professionals to the sector.

However, she also believes graduates can benefit by adopting a broad approach when thinking about their next career move.

“Try not to focus too hard on getting that position with ‘graduate’ in the title. You don’t need to start at the top. Take any opportunity to get into the industry, grab it and use it to develop yourself, learn from any experience provided to you and use the knowledge and experience to get where you want to be.

“And don’t worry if that end position is not what you thought you would be doing, or what was studied at university – focus on what you enjoy and are passionate about and you will go a long way.”

To find out more about Tendeka, visit www.tendeka.com 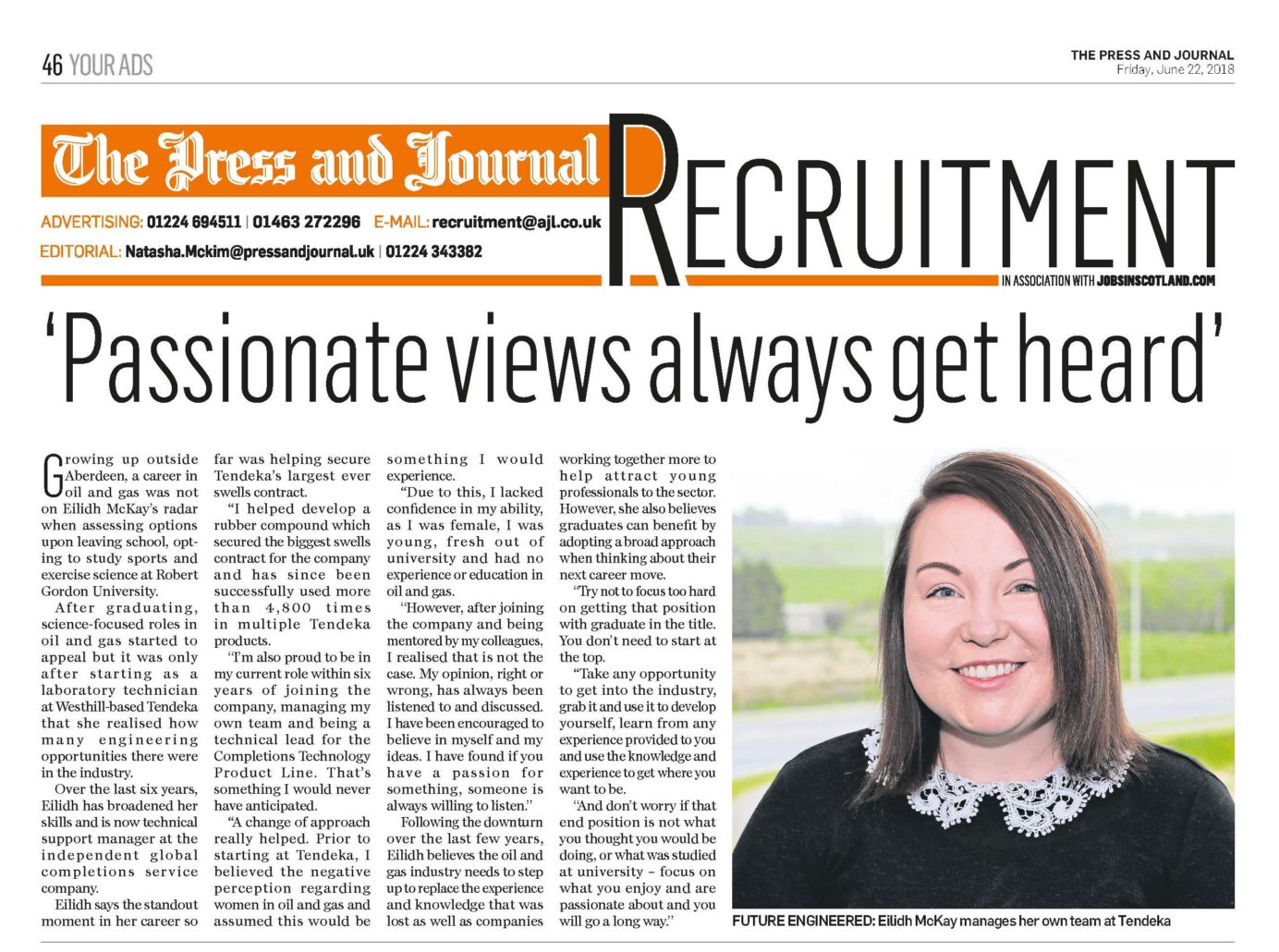