Everyone knows the oil and gas industry has gone through a few very tough years. The North Sea was particularly susceptible being so dependent on oil and gas, with almost 200,000 people losing their jobs since the downturn began in 2014. That’s 39% of those employed in the industry out of work.

On recently moving back to the UK, I was pleasantly surprised by what I was met with. There was an overall positive feeling as things were starting to pick up, people were spending money again and cuts appeared to have reached the bottom.

And this outlook is said to improve further for 2018. According to Oil & Gas UK’s 2017 Economic Report, there is evidence that the rate of job losses is now slowing from 60,000 in 2016 to a reduction of around 13,000 in 2017. However, it’s also a fact that low levels of exploration and appraisal activity remains a serious concern.

In the report, Oil & Gas UK’s chief executive Deirdre Michie signalled the shift in sentiment by stating: “Despite our difficulties, we’ve got more reasons to be positive and some great stories to tell that demonstrate the real progress that we are now making. Our sector is successfully re-positioning through efficiency and cost improvements. We are transforming in a way that is getting UK oil and gas back in the game. We are increasingly being seen as a much more attractive basin in which to invest with further M&A activity expected over the remainder of this year and into the next.”

Aberdeen & Grampian Chamber of Commerce’s 27th Oil and Gas Survey echoed such findings and like these organisations, I am encouraged to see that the downturn hasn’t left the sector too downbeat.

Positive stories are hitting the headlines once again. Oil specialists, Wood Mackenzie heralded 2017 as a milestone year with a decade high number of new project start-ups in the North Sea. It expects this could result in the production of an extra 230,000 new barrels of oil and gas a day, though experts warn it may be a difficult feat to repeat.

I recently had the pleasure of meeting with some of the new operators to the North Sea. For instance, Serica who bought BP’s Bruce, Rhum and Keith fields and operate the Columbus gas-condensate field, and Chrysaor, who have purchased and are actively developing many of Shell UK’s older fields. Phil Kirk, CEO of Chrysaor, has asserted that ‘collaboration and cutting edge technology’ are crucial to raise production in the UKCS.

Tendeka shares this ambition to create a brighter future for the North Sea and beyond and has adapted its production offering to allow clients to squeeze as much as possible out of their existing wells with advanced completions and production optimisation technologies. Last year, we invested in a brand new global headquarters in Westhill and have expanded our portfolio of mature field technologies with the commercialisation of PulseEight wireless intelligent completion technology which can provide significant benefits in mature field applications, typical within the North Sea.

There are opportunities out there; it just requires some focus and collaboration with our clients to develop innovative and cost-effective ways of working together. 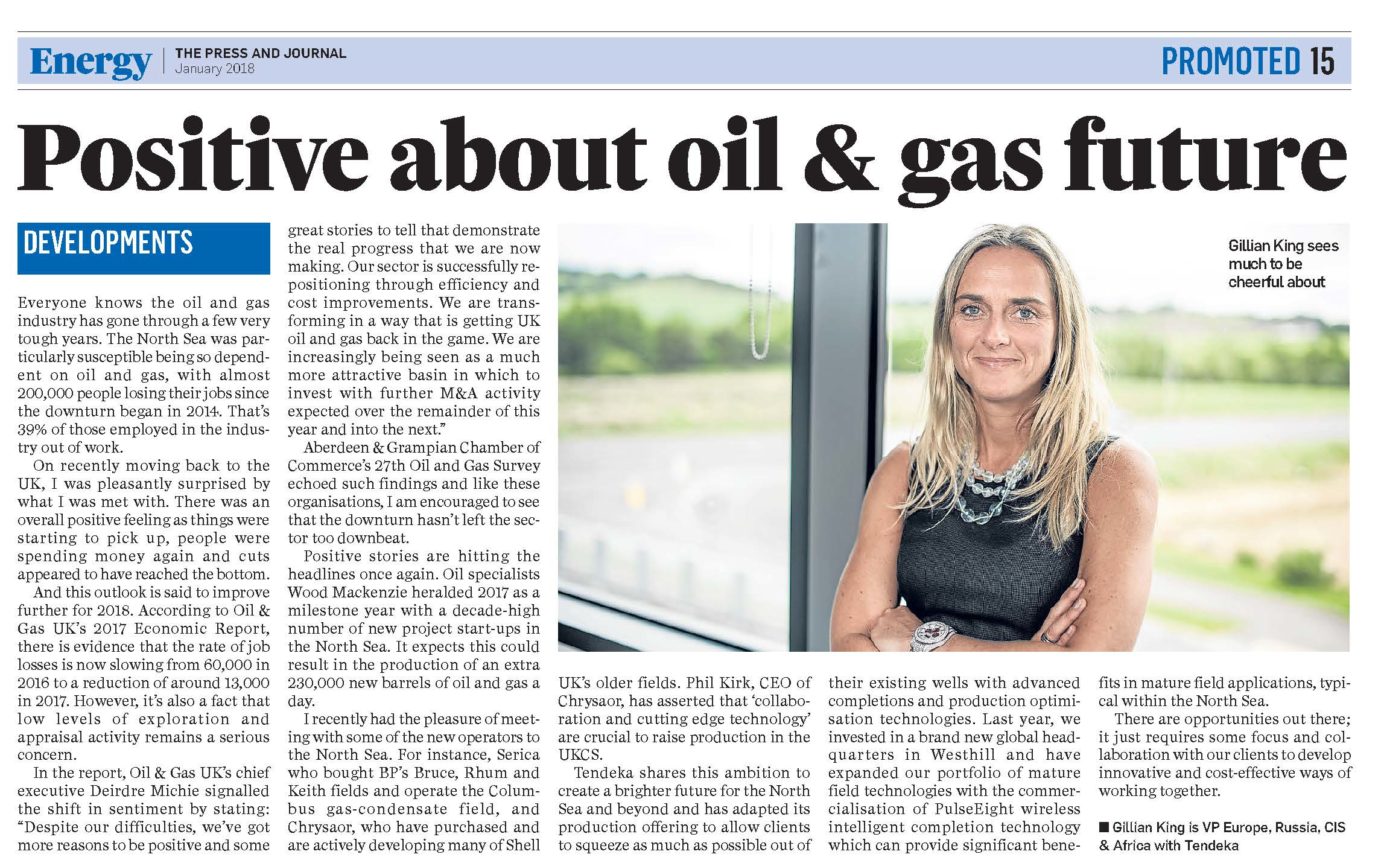